A bit of history about the Hocking Hills- 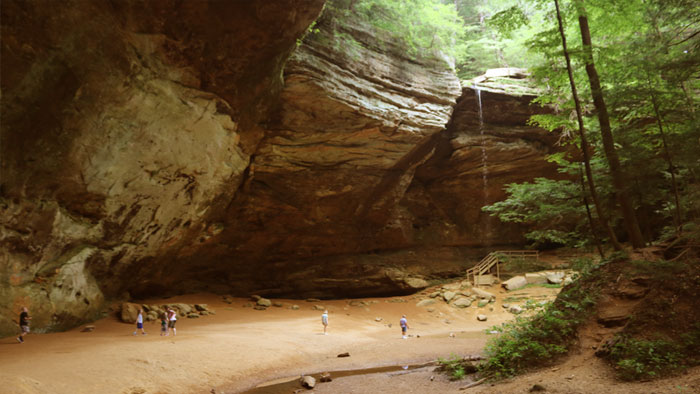 People have always been fascinated by the breathtaking beauty left behind after nature carved her name into the Blackhand Sandstone of Old Man’s Cave. Many enjoy the unique features around Old Man’s Cave, but few people question how nature cut the hollows and ridges into this particular stretch of land.

It’s pretty simple. To begin with, the gritty, reddish stone you see all over the park is a type of sandstone called Blackhand Sandstone. It was left behind more than 200 million years ago when Ohio’s ancient ocean drained from the land. But long after the sea disappeared, the land around Old Man’s Cave was still being changed by millions of years of subtle movements and shifts deep beneath the earth. Actually, along with the earth’s movement, it’s nothing more than water and erosion that made this place we call Hocking Hills. Your back yard might be able to take on this same effect with a hose, a shovel, and some earthmoving equipment. Oh, and you’ll also need a few million years of patience too. That’s about how long it took just for the water to erode the surface to form the deep pockets, cracks, and grooves. And of course, you can see the erosion at work when the spring rains fill up Queer Creek near Old Man’s Cave, and she pours her excess into what we call Cedar Falls. But you might want the strength of a glacier to help you out too. Although the glaciers didn’t quite make it to the park, the kind of plants that existed during the glacial period are still in the deep gorges. The huge hemlocks, black birch, and Canada yew are all signs of the gorge’s cool past.

The Legend of the Old Man: 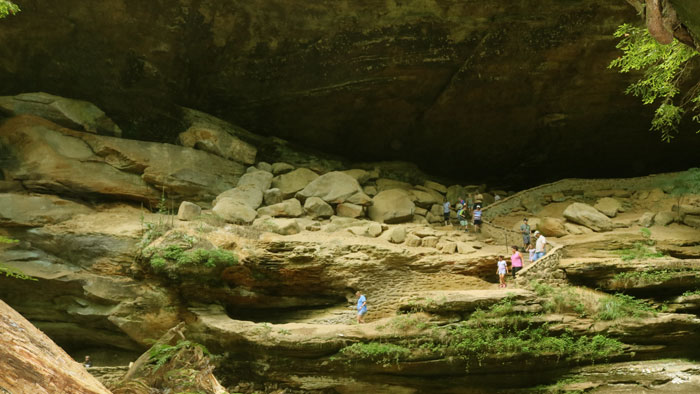 There have been lots of folks over the years who have visited the Hocking Hills Region. More than 7000 years ago, the Adena Culture left evidence of their sojourns to the park. In the 1700’s Indian tribes like the Wyandot, Delaware and Shawnee traveled through or lived in this area. Legends say that trappers once used the recess cave in the park. One such trapper left his mark, and those who came after would give it a nickname in his honor. The earliest documentation of his legend is found in an old Logan, Ohio newspaper-

In 1907, Democrat Sentinel printed a story about two boys exploring the caves near Cedar Grove and not far from Logan. After a while, they grew tired and built a small fire on a ledge inside a recess cave. They talked about their adventures of the day while the small flame danced above the kindling they had collected. Upon hearing a rustling in the leaves like footsteps, they paused to look up and were startled by the image of an older man. He had stopped near the fire, appearing quite curious about their conversation. The boys were also nearly dumbstruck by his peculiar appearance—he had a long gray beard and old-fashioned leather clothing, including moccasins on his feet. He also had a gun slung over his shoulder. Nearby, a huge, white hound had stopped beside him. Upon the boys noticing his presence, the old man slipped quietly past as if he didn’t want to alarm them and eventually disappeared into the oozy darkness of the far side of the cave, seeming to sink into the sandy ground. Quite unsettled, the boys ran home to their families and told them of the ghostly man who had appeared to them in the cave. Immediately, townspeople hoisted picks and shovels to shoulders, and a curious group went to the shelter and began to draw out the dirt where the old man disappeared. The ground appeared sunken into a room about four feet square. Within and about three feet down, they discovered a box. As they lifted the lid, they found the mummified remains of a man and a dog, almost as lifelike as if they had just crawled inside. However, it had been many years since the man and dog had died.
There were also cooking utensils, a flintlock gun, and a pot with information about the old man’s life. It appeared he was a trapper along the Cedar Valley Creek who died in 1777. Although the old man’s name was given as Retzler, and his dog’s name was Harper, and his gun, Pointer, most will know him as The Old Man of Old Man’s Cave. Throughout the years, many have seen his ghostly figure walking with his dog through the cave at Hocking Hills State Park that bears his nickname. He has come upon hunters and fisherpersons at Rose Lake as a white figure with a baying hound in the misty air of dawn. He has been seen by early picnickers and hikers at Lower Falls walking with his dog. Even today, some claim to see him moseying along the trail during daylight hours with his dog, just like the boys in the early 1900s watched him disappear in the cave. 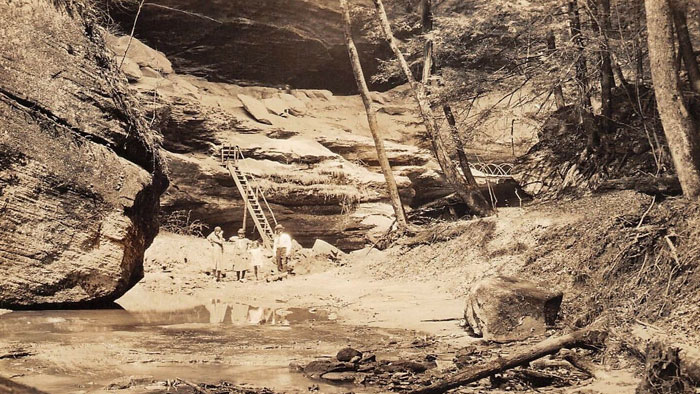 The Old Man's Cave (above) has been a popular place to travel even before becoming a part of the state forest park in 1927. In the early years, people visited the cave to see the bones of the Old Man. 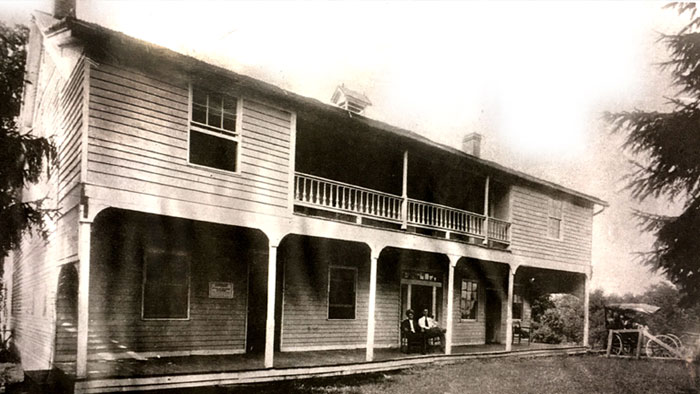 In the 1830s, industrious settlers built a powder mill near Rock House, and there was a grist mill at Cedar Falls. In the early 1900s, Rock House had a hotel (above) in operation, and Ash Cave was a popular gathering for church-goers whose preachers used the large rock near the recess entrance as a pulpit. 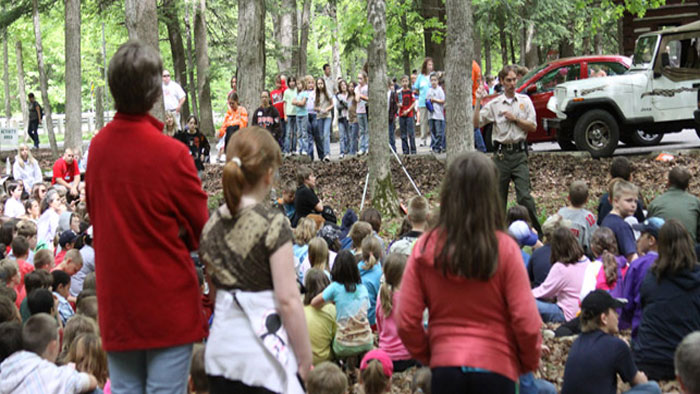 In the 1920s, the State of Ohio purchased the first parcel of 146 acres, which included Old Man's Cave. Until the State of Ohio created the Department of Natural Resources in 1949, and a new Division of Parks assumed control of Hocking Hills State Park, the lands purchased existed under the Department of Forestry. The state opened a dining lodge and cabins in 1972. Today, the park features cabins, camping, hiking, picnicking, and year-round naturalist programs. Although the original building burned down in 2016, the state is constructing a new building with dining and 81 overnight rooms by October 2022.

OPEN ALL YEAR-ROUND FROM DAWN TO DUSK

There are seven major hiking areas in Hocking Hills State Park - All are one-way trail systems.

Ash Cave, Old Man's Cave, Rock House, Conkle's Hollow, Cedar Falls, Cantwell Cliffs, and Whispering Cave Trail. These park areas offer a unique experience for those who walk its paths no matter what season (the park is open year-round from dawn to dusk)—located on the southern edge of Hocking County.